Release date for Bound to Surrender

I received the galley and release date for Bound to Surrender--Woot!

I comes out on 9/10/2010. I'm so excited about this one because, although it's the second in the trilogy, I actually wrote it last & it's the first story I ever wrote that developed completely "organically."

The genesis was a late night FB IM conversation: Is sex always about surrender?

From that one question sprang these characters, the sexual tension between them, and ultimately the resolution of their story.

The link is here: Bound to Surrender

I'm also excited because it features quotes from a writer/reader/reviewer I met through this blog, Gina Kincade. And because it's dedicated to two friends who've been incredibly supportive through this journey.
Posted by Tess Lamont at 10:27 PM No comments:

I don't have a release date for Bound to Surrender, but since the cover is ready, I think we are getting close! To celebrate I thought I'd post a teaser. This is from an early scene. There is a heat wave in South Jersey, my heroine, sexy school librarian Christina, has just decided to get ice cream. Who should walk in behind her but the man she's just been fantasizing about, Bryce Walker. Bryce begins the scene:

“I hear the vanilla here is very good, but if I were you, I’d be a bit more adventurous.”

With a bolt of awareness, Christina recognized Bryce Walker’s throaty baritone. His voice sent chills up her legs. When she glanced sideways, the muscles behind her knees weakened further.

Bryce was not a man to be trifled with, however, and she’d had her fill of overbearing males, thank-you-very-much.

His rakish smile stopped just beneath his sunglasses. I’d be more adventurous. Christina had no doubt of the double-entendre of his suggestion, but she couldn’t act offended. Her body drummed the truth. She wanted nothing more than to pick up what he was putting down.

“Hello, Mr. Walker,” she said, in her best librarian-voice. “Thanks for the advice, but I wasn’t considering the vanilla.” She lifted an eyebrow. Their eyes locked and the pulse in Christina’s sex began.

The bells clanged as another customer entered the shop. She turned back to the server.

“I’ll go with the maple walnut,” she said, correcting her posture and straightening her skirt.

Bryce stood way too close. His heat radiated through her blouse, contrasting with the cool sensation of the counter against her belly. Christina suppressed the urge to giggle.

“Cone, please,” she replied in clipped tones, but on impulse she added, “and you know what else I want? I want Jimmies.”

The clerk nodded, not bothering to glance up before preparing her order.

“Feeling reckless?” Bryce asked, cocking his deliciously masculine head to one side.

She shook her head no. “Indulgent, more like. It’s my birthday.” Why did I tell him that?

“In that case,” Bryce turned and spoke to the clerk, “I’ll pay for the lady, and add a single cone of vanilla to the order.”

The clerk nodded, handing Christina her cone. She thought of refusing Bryce’s offer, but decided against it. To tell the truth, his gesture made her feel ridiculously pleased, even giddy. She couldn’t remember the last time someone had bought her ice cream.

“Hey, I thought you said to try other flavors…” she laughed. “I wouldn’t have pegged you as a vanilla man.”

“Oh, I’ve tried other flavors,” he replied. “Once I know what I like, though, I stick with it.”

Christina swallowed. “Mr. Walker, you really don’t have to pay for me,” she forced herself to say.

“But I want to,” Bryce purred, taking his own cone and handing the clerk cash. “Besides, it’s your birthday.”

Bryce held out his arm toward one of the shop’s small tables. He placed a warm hand on the small of her back and guided her toward the table. Then, he slid in across from her and leaned forward.

“Happy birthday, Ms. Welch,” he said, his voice low. “Do you have a wish for me to grant?”

Bryce’s eyes held her, testing her and challenging her to respond. She swallowed a lick of ice cream. The cold sensation slid into her belly as she tried to remember the reasons why she’d held this man at bay. Bryce was strong, virile, and clearly interested. Why had it seemed so necessary to keep him at arm’s length?

Work. Michael. Oh yes, and the uncontrollable flame he stoked in her pussy.

Just as she was about to slow it down, her mind rebelled. Too much denial, it screamed, too much restraint. What harm could a little flirtation cause? She practically salivated with the need to take what he offered.

“Mr. Walker,” she asked as her throat dried, “are you flirting with me?”
Posted by Tess Lamont at 4:35 AM No comments: 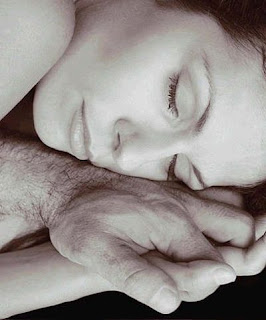 I haven't posted a Photo Tuesday Tease in awhile...

I saw a photo that was so evocative today, I just had to post it. I would love to credit the photographer or models, but I couldn't find out who they were--if anyone knows, tell me!

How romantic is this shot?
Posted by Tess Lamont at 10:54 PM No comments:

Covers for Bound to Surrender & Bound to Ignite 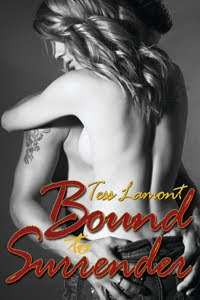 I just received the covers for my next two books in the "South Jersey Heat" series of 3. The upcoming releases are Bound to Surrender (Christina's Story) and Bound to Ignite (Gillian's Story).

These covers are soooo HOT, I could have used them for my "Photo Tuesday Tease"!

Like the first, they were desiged by my talented editor Angela Anderson, wh 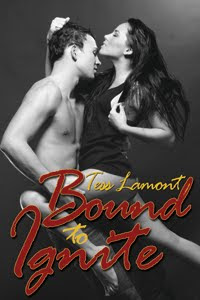 o captured the feel of both the story and the characters in each one. Yea! I feel so lucky.

What do you think?
Posted by Tess Lamont at 2:04 PM No comments:

Tess Lamont
New York City, NY, United States
Tess Lamont tried to be a good girl. Really. But despite her best efforts, her imagination kept right on wresting her away to places where powerful men appear to dominate, but willing women keep them both guessing and enthralled. Tess has been writing stories since she can remember; however, only within the last 2 years did she finally summon the courage to take her dream seriously and banish her inner censor. Tess lives in New York City with an often incredulous, but marvelously supportive husband. She enjoys writing romance, reading romance, web surfing, laughing with her best friend ‘til her sides hurt, wine and cheese. She hopes her tales of wicked, lusty love leave her readers breathless.

Click to buy Bound to Be Mine from Amazon

Watch the Trailer for Bound to be Mine

Watch the Trailer for Bound to Surrender

Watch the Trailer for Bound to Ignite